Home / Inside SFCC / Sustainability on a world stage

Sustainability on a world stage 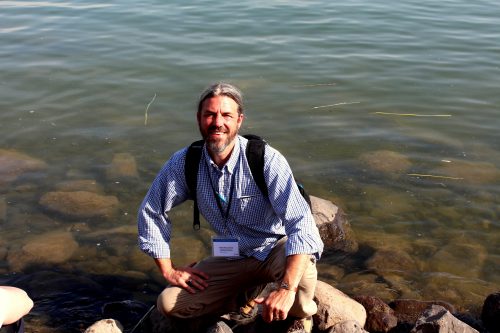 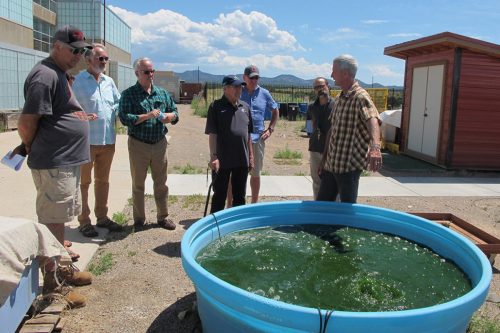 Luke Spangenburg talks about the importance of algae with environmental activist Oren Lyons. 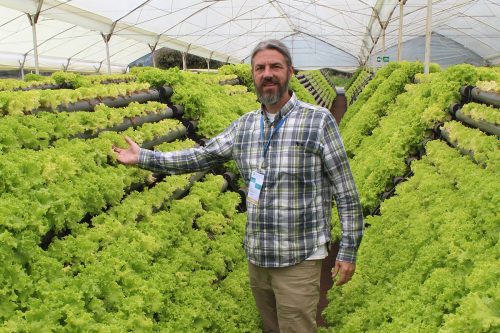 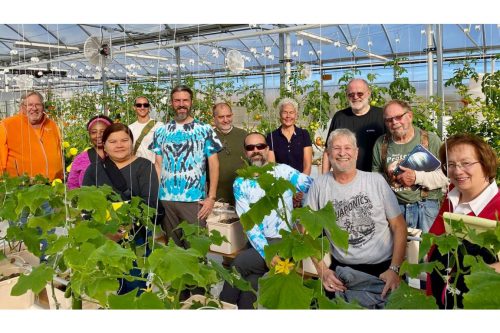 Richard C. "Charlie" Shultz and Pedro Casas (in the tie-dyed shirts) lead both credit classes and CE workshops, such as this one.

If you’ve stopped by SFCC’s large greenhouse in recent months, you’ve probably noticed that fish and dozens of plants are thriving while temperatures outside plummet below freezing.

The reputation of SFCC’s Controlled Environment Agriculture and Sustainable Technologies programs continues to grow, nationally and internationally. More people are coming to see what’s happening in SFCC’s state-of-the-art Trades and Advanced Technology Center. The greenhouse, algae and biofuels lab, and solar and water treatment classrooms are teeming with innovation and cutting-edge education. The newest addition is the Microgrid Distributed Energy Platform, which will use SFCC’s renewable energy assets.

SFCC’s Sustainable Technologies Program is working with Acacia Moyo group to bring Maasai agriculture students to campus and enhance their knowledge of controlled environment agriculture processes. This developed from a visit earlier this year when faculty and staff in the Trades and Advanced Technology Center hosted Phoebe Lasoi, a Maasai artist. Lasoi led a Continuing Education bead working class. As a result, five Maasai girls received scholarships to continue their education in Kenya.

The U.S. State Department recently identified SFCC’s Trades and Advanced Technology Center facilities as an outstanding example of resilient infrastructure and education. International groups who have toured the center include women entrepreneurs from Kyrgyzstan, a group from Kenya and representatives from Central and South America. Importantly for our tribal communities, internationally renowned environmental activist, Oren Lyons, toured in August and has since recognized the college for leading critical initiatives in the face of climate change.

Camilla Bustamante, Ph.D., dean of Trades, Advanced Technologies and Sustainability, said, “The globe is looking for solutions to address climate change. SFCC’s sustainability programs are on the cutting edge with research and education. The college welcomes the opportunity to be a global resource.”

Charles “Charlie” Shultz, Lead Faculty of the Controlled Environment Agriculture Program, recently represented the department on the international stage – in Israel and in Bogota, Columbia. “I’ve been happy to represent SFCC’s sustainability programs. They are all interrelated,” Shultz said. “We’re all interested in energy conservation, healthy food production, water conservation and living in a more sustainable world,” he said.

“Israel is a world leader in solar energy systems, water conservation and treatment, as well as sustainable agriculture. This was a great opportunity to learn from their expertise and for exchange with other professors from around the world,” Shultz said. “It has also opened the door for our students to have internship opportunities there.”

He enjoyed visiting various cultural, archaeological sites and medical centers, but was particularly happy to visit the Arava Institute where he was able to see how the institute is addressing many similar sustainability issues in a desert environment. The Institute includes the Center for Renewable Energy and Energy Conservation, Center for Transboundary Water Management and Center for Sustainable Agriculture. “New Mexico and Israel have much in common as we are both interested in year-round food production in an arid, desert environment,” noted Shultz. He will speak about his experience in Israel from 2 to 3 p.m. April 15  in the SFCC Library as part of Spring Library Faculty and Staff Speaking Series.

In Bogota, Shultz presented at an international aquaponics conference. He was invited to speak about SFCC’s Controlled Environment Agriculture program. Shultz gave talks on “Evolution of the Industry” and “Potential for Organic Certification for Aquaponic Crops.” His talks and all conference talks can be found at this link (most in Spanish).

Shultz was part of an SFCC team last May that included Dr. Bustamante, Director of Biofuels Center of Excellence Luke Spangenberg, and sustainability faculty member Stephen Gomez, Ph.D., that participated in the Hispanic Association and Colleges and Universities 13th International Conference, “University Resilience: The Challenge of Climate Change and Other Global Shifts” in Puerto Rico.

SFCC once again took a lead role in Putting out Fruits: Aquaponics Association 2019 National Conference hosted by Kentucky State University in September. There were more than 250 participants from across the country and the globe. Shultz was the keynote dinner speaker, where he spoke about the “Evolution of the Industry.” Pedro Casas Cordero updated the audience about the Controlled Environment Agriculture Program and Dr. Gomez spoke on the nanogrid project and the algae curriculum. SFCC’s Innovation Center and Algae Technology Educational Consortium in part funded the travel for SFCC faculty and staff.

Also in attendance were Nate Downey and Lucien Blakemore, students who paid their own expenses to participate. As a result, Blakemore received a job offer and is now working with Symbiotic Aquaponics.

Downey, who is president of Santa Fe Permaculture, Inc., hopes to open his own aquaponics business in Santa Fe. He frequently writes columns about sustainability for the Santa Fe New Mexican.

Due to the enthusiastic reception of SFCC participants at the conference, the college was asked to host the annual conference in 2021.

Shultz will participate in February at the Aquaculture America conference in Honolulu, Hawaii.  He will give three conference talks as well as participate as an instructor for a full-day Advanced Aquaponics Workshop.

Shultz was also recently invited to be a panelist and speaker at Indoor Ag-Con, the premier indoor farm conference to be held in Las Vegas, Nevada in May 2020.

Sustainability a key regional resource, too

In addition to its visibility on the national and international scenes, the Controlled Environment Agriculture Program continues to be a valuable regional resource. In November, New Mexico State University Extension services reached out to Shultz and Casas to teach a workshop on aquaponics. More than 40 individuals from Northern New Mexico were in attendance.

Shultz  and eight of his students will represent the Controlled Environment Agriculture program and SFCC  Feb. 21 to 22 at the annual Organic Farming Conference of New Mexico in Albuquerque.

As the new greenhouse facility comes to life, food is being distributed around campus. The greenhouse staff delivers fresh produce weekly to Food Services and the Culinary Arts classes. Controlled Environment Agriculture students, faculty and staff are now exploring how to get fresh produce into the Campus Cupboard, the college’s food pantry for students experiencing food insecurity.

Casas is thrilled that some of the harvest from the greenhouse is now making its way into soups and salads.