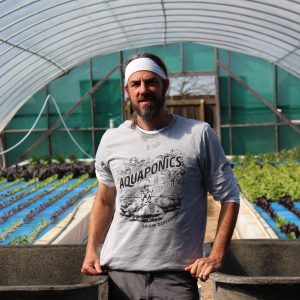 Charlie Shultz is an Academic Director in the School of Trades, Technology, Sustainability and Professional Studies. He is the Academic Director of the Controlled Environment Agriculture Program, including hydroponics and aquaponics. Charlie began working with fish and plants as an undergraduate at Virginia Tech while earning two B.S. degrees, in Biology and Fishery Science. After a short stint at the University of Georgia working with transgenic fish for toxicology purposes, he found his calling at the University of the Virgin Islands in St. Croix, U.S. Virgin Islands. There he specialized in developing aquaponics using tilapia and a variety of plant crops, as well as other fish production systems. After 14 years, Charlie returned to the mainland U.S. for graduate school at Kentucky State University where he researched indoor aquaponics production including an energy analysis and production potential using various lighting technologies. Charlie spent the following two years working at Lethbridge College in Alberta, Canada, addressing bottlenecks in the upcoming commercial aquaponics sector. Following that grant-funded position, Charlie ran a commercial aquaponics facility in San Marcos, Texas. The drive to continue research, teaching and extension brought Charlie to SFCC. Charlie can be reached at 505-428-1941 during the day and will be happy to discuss the Controlled Environment Agriculture Program.