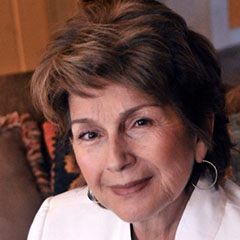 Join Santa Fe Community College for the upcoming talk for Women’s History Month at 11 a.m. March 25 in Room 216 for “Ability and Disability: How Blindness Became a Vehicle for a New, More Joyous, Creative Life and the celebration of Women’s History Month,” featuring Yolanda Nava, Emmy Award-winning broadcast journalist and author of Journey Through the Dark.

Yolanda Nava inspires people to live their lives with purpose, passion, and grace. For decades and across the entire media spectrum, Yolanda Nava has worked tirelessly to advance education, justice and culture in this country.

Nava is an award-winning veteran broadcast journalist and author of the award-winning book of Latino virtues, It’s All in the Frijoles: 100 Famous Latinos Share Real Life Stories, Favorite Folktales, Time-tested Dichos and Inspiring Words of Wisdom. She was a news reporter, anchor and talk show host on NBC and CBS stations in Los Angeles and Sacramento. She also hosted a nationally syndicated television magazine and founded KCMY/TV.

Nava was also the first Mexican American Woman to found, own and operate a television station in the United States, and the first to appear on affiliate network news in Los Angeles. She has served on the boards of many institutions, including the Los Angeles Chamber Orchestra, the Metropolitan Water District and Plaza de Cultura y Artes. She worked for Governor Bill Richardson, serving in executive positions for the Museums and State Monuments in New Mexico and the National Hispanic Cultural Center in Albuquerque.

Nava is currently touring the country on speaking engagements.