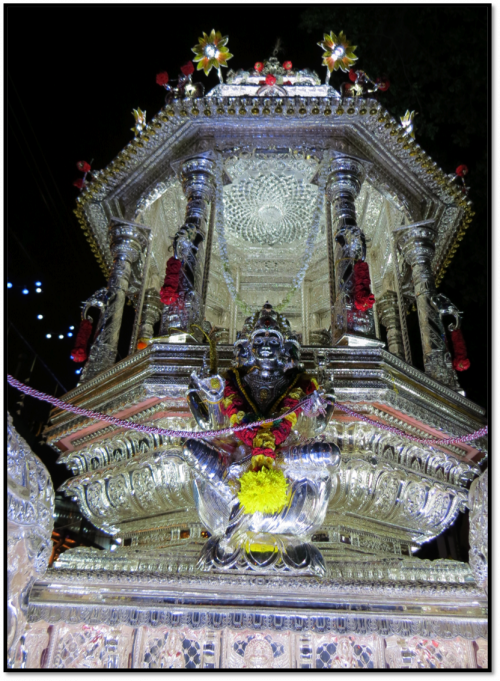 Front of the chariot. 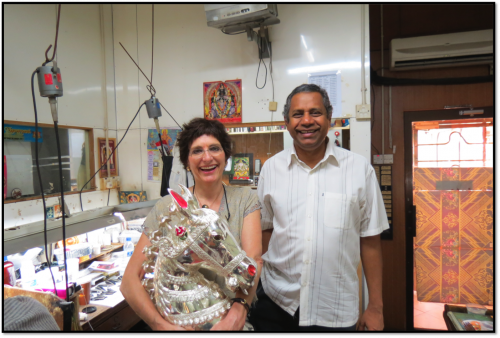 SFCC’s Head of Jewelry and Metal Arts was asked to be a guest lecturer for the Friends of Folk Art lecture series in March 2021. Watch the video of FRIENDS OF FOLK ART LECTURE by Sydney Scherr “Mohan’s Chariot: A Journey into Divine Creativity.”

Lecture description: The Hindu belief system has a rich history of creating and using chariots, or “temple cars.” These traveling temples bring the temple to those people who are unable to come to the temple during festivals and holidays. Typically, chariots denote a specific deity attached to an individual temple. Sydney Scherr is the only woman in the world to be invited to work on a chariot as this is the work of men, men who learned the art of the Chariot makers from their fathers and grandfathers. Since completion by a team of silversmiths from Tamil Nadu, India, Mohan’s Chariot, made for the deity Ganesh, has been designated as the finest example of silver Hindu Chariots in the world.

In addition to working on the chariot Ms. Scherr documented the process of creating this splendid moving temple that is 22 feet tall, weighs over 1 ton of silver and is comprised of many thousands of chased and repoussed silver panels, 7000 handmade silver nails and 102 large enamels. It is the only chariot in the world adorned with enamels, and these were Ms. Scherr’s contribution to this remarkable chariot. To witness and participate in this creation, and the lively environment where it was made, is to enjoy the embrace of a community of metalsmiths so rich in similarities yet distinctly culturally unique. This journey is not only in recognition of the historical and spiritual depth found in Mohan’s studios, this journey describes a familiar thread that engages all creative individuals. It is the intuitive connection to work and working that compels artists. Ms. Scherr’s presentation will introduce the audience to the metal shop and the metalsmiths of Tamil Nadu and Kuala Lumpur and the extraordinary work that was done to create Mohan’s Chariot.

Sydney Scherr is an award winning designer, goldsmith, sculptor, illustrator and educator. She has more than 38 years of experience teaching on the college level, and spent seven years developing and helming the Jewelry Design program at Raffles College of Higher Education in Kuala Lumpur, Malaysia. She has taught at Parsons School of Design, Meredith College and was department Chair at SCAD. In 2018 Ms. Scherr was appointed the position of Program Head of Jewelry and Metal Arts at Santa Fe Community College.

Since 1979, in addition to teaching, Ms. Scherr has worked in the jewelry industry in New York as a designer, prototype developer, production manager and bench worker. Concurrent with working in the industry she maintained her own jewelry design studio specializing in unique and custom jewelry work in silver, gold, platinum and enamels. She also creates large scale sculpture in exotic hardwoods, silver, enamel and gems.

Visit Syndey Scherr’s website. Sydney is scheduled to be showcasing her jewelry at La Fonda of Santa Fe starting March 26 from 10 a.m.-6 p.m. and will be there many Fridays through Sundays.