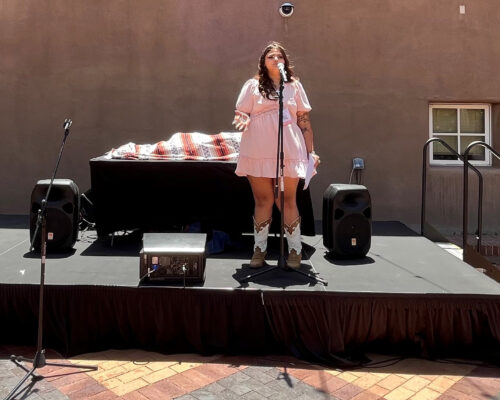 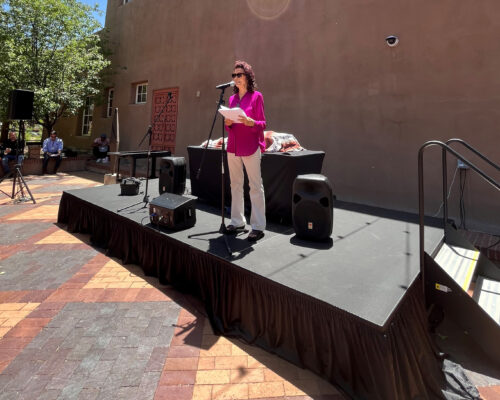 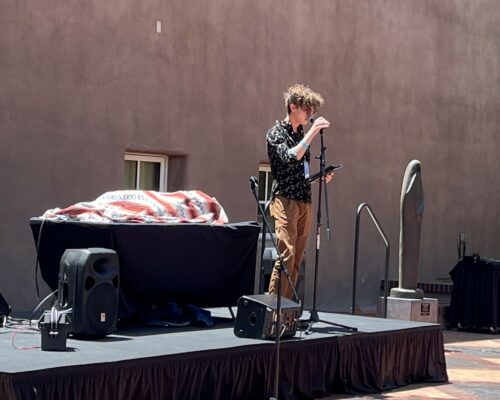 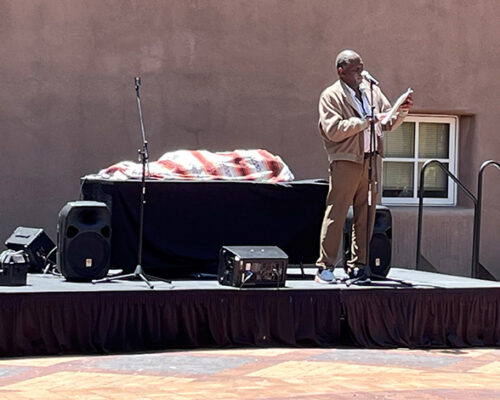 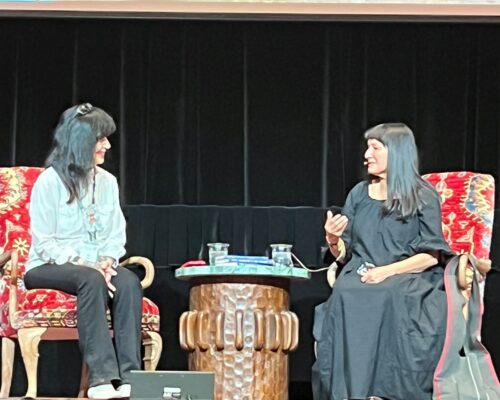 Creative writing faculty Kate McCahill and Shuli Lamden coordinated with Clare Hertel, co-founder of the Santa Fe Literary Festival 2022, to secure 16 free all-access passes for students, an exclusive lunch for eight with a festival author, and a place on the community stage for some SFCC poets and creative writing students and Terry Wilson, one of SFCC’s creative writing faculty. The passes alone were valued at thousands of dollars.

Terry Wilson opened up the mid-Saturday free, public reading in the Santa Fe Convention Center Courtyard. Terry read a piece called “Housemother,” a reflection from when she worked at Ingleside Home for Girls in 1970 in Buffalo when she was quite young. (It was a Home for Unwed Mothers) Terry said that the work was pretty relevant since Margaret Atwood had spoken a few hours earlier about “Handmaids’ Tale.

Here are some excerpts from the Santa Fe New Mexican story: “”It was a great opportunity, you know. I don’t know the next time that I’ll probably be in the same building as, like, Margaret Atwood or Sandra Cisneros or George R.R. Martin,” community college student Marcelina Gallegos said. ‘So, it’s just really special.’ … Gallegos said she was inspired by Atwood to read a poem at the festival she had written two years ago about the silencing of sexual assault victims in her community.”

Another exerpt: “Sterling Scherchel — a young Black poet who uses the pronouns “they” and “them” — said they wrote a poem to send a message about race and justice to the festival’s mostly white audience.

Scherchel’s poem, “White,”explored the “white moderate’s” failure to offer equity to marginalized people as it espouses diversity and inclusion.

“I think a lot of people like to pat themselves on the back for just even seeing artists like us,” Scherchel said. “So I didn’t want to just get up on stage and be one more person of color performing for free, for those people who can walk away and say, ‘Oh, yeah, I consume diverse content.’ I wanted them to actually hear what I was saying and walk away feeling a sense of obligation.”

Terry Wilson said she and the students appreciated the opportunity to meet with journalist and biographer James McGrath Morris, at one of the Story Ladder events. He answered their questions and gave sage advice.

Terry Wilson added, “My favorite part of the festival was seeing (author) Sandra Cisneros and (U.S. Poet Laureate) Joy Harjo Sunday night. (They were introduced by Levi Romero — Poet Laureate of NM). The whole event was a conversation between the two women — they’ve known each other and been friends for decades, having met (in the 1970’s, I believe) at the Iowa Writers’ Workshop! Both women said they would not have stayed in the Iowa Writers’ Workshop without the other because they felt out of place since mostly white people were there. It was so honest. Such astute advice about writing and so much wisdom imparted about being a writer.” The auditorium was almost packed and three of Wilson’s students joined her at the talk.