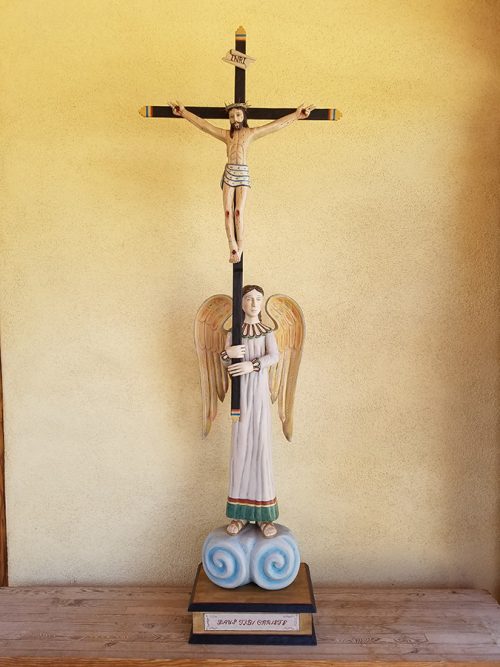 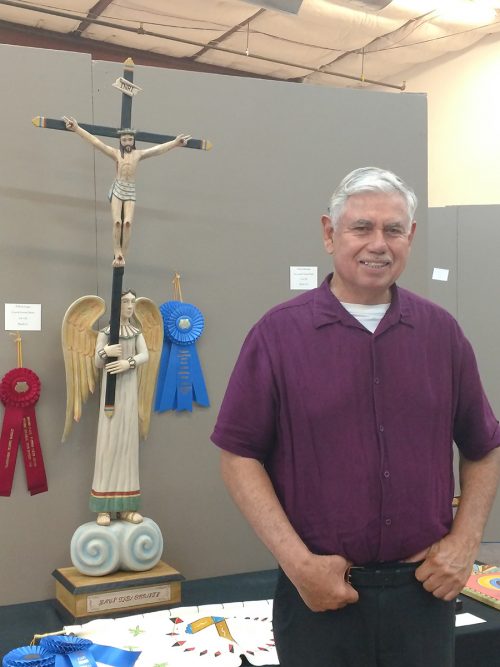 Lopez has taught at the college for 12 years. Many of his students have also won awards at Spanish Market.

Lopez has received numerous awards throughout his career.  He first participated in Spanish Market in 1976. Among his many recognitions, he was given the 2007 Lifetime Achievement Award by the Spanish Colonial Arts Society and 2016 Governors Award for Excellence in the Arts. He also has a major piece, Nuestra Señora de los Dolores, in the Smithsonian American Art Musuem.  He’s also known for his art conservation work in Northern New Mexico including work at the Santuario de Chimayó, Santa Cruz de la Cañada Church and the Nuestra Señora del Rosario church in the mountain village of Truchas.

Felix Lopez has also inspired his family members to embrace the traditions of Spanish Colonial art. His son Joseph, who also has taught at the college, won the Archbishop’s Award and the 2020 Poster Award at Spanish Market.

His daughter Krissa also participates in Spanish Market.  Krissa, a retablo painter, made the piece, “Our Lady of Guadalupe,” which was presented to interim president Cecilia Cervantes, Ph.D., as a retirement gift.

Felix Lopez said, “I’ve always loved teaching and the job at the college is perfect for me.”  He taught Spanish at Española High School for 26 years.

“My classes are a blend of lecture, demonstration and studio experience,” he added. “I lecture on traditions, the history of Spanish Colonial art and the culture for a part of my class time. I also have my students research and present on a related topic. Then I let the students work with guidance from me.”