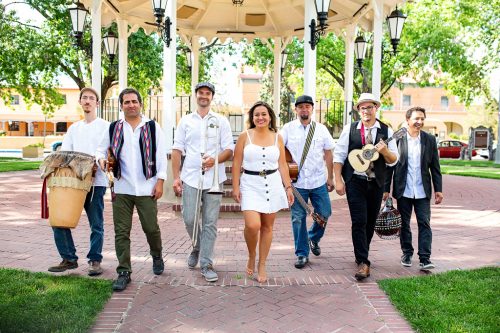 Join SFCC and bring your friends to a fun evening of listening and dancing to Baracutanga this Sunday evening at 6:30 p.m. at SWAN Park, 5300 Jaguar Drive in Santa Fe. Doors open at 6 p.m. This show is sponsored by SFCC and is being produced by AMP Concerts. Although the event is free, AMP asks everyone to register in advance at https://www.ampconcerts.org/event/375883/baracutanga-.

Feel free to bring chairs to the concert. There will be food vendors and water filling stations. Parking is limited. AMP encourages everyone to ride their bikes or walk in if possible.

Baracutanga is a seven-piece band representing four different countries (Bolivia, Ecuador, Peru, USA), that blends South American ancestral traditions with a modern sensibility, whose exciting and distinct Latin flavor keeps crowds dancing and always wanting more. Baracutanga creates songs that cross linguistic and cultural barriers, building bridges between the south and the north, overcoming the barriers of discrimination and promoting intercultural experiences that empower Latinos and all people with a positive message of self-affirmation.

Be sure to stop by the SFCC tent and say hi. Bring your friends and family.

Check out the band’s awesome video.

Baracutanga’s joyful music is a fusion, but it’s an organic one, the product of the members’ combined musical backgrounds and interests. Kilko Paz, who most often plays the charango, from Bolivia, bass player Carlos Noboa is from Ecuador, and powerhouse vocalist Jackie Zamora hails from Peru, while drummer and percussionist Nick Baker, guitarist/accordion player Casey Mraz, and Micah Hood, who plays trombone and flutes, are from the US. Some members are university trained, others are self-taught musicians.

The members of the band met in Albuquerque in 2009 and connected over their love of Brazilian music. Their first sessions together were drum jams in the raucous samba style known as batucada. Though they soon began exploring more rhythms, you can still hear plenty of Brazil in their sound. Today, they are as much a borderless musical community as they are a band. Some shows will see as many as nine musicians on stage, plus Afro-Latin dancers.

The collective’s spirit of openness and community extends to their audience and tends to be infectious. Their live shows always bring the party to whatever venue they are in. “Our main characteristic is that, wherever we go and play, people dance,” Kilko says. As people across South America well know, huayno, cumbia, and samba are easy to dance to and hard not to dance to. Mix them together and you’ve got quite the recipe on your hands. Nick promises, “Whether you have learned to dance a cumbia or samba, you’re going to dance anyway.” Still, this band isn’t taking any chances, and often hold workshops with dance instructors as part of their events.

Making people dance is about more than a good time for Baracutanga, it’s part of their message. As Kilko puts it, “A dance floor is a representation of an ideal world, because people of different ages, cultures, political views, religious backgrounds are together dancing and having fun.” Their wildly danceable music is therefore an excellent vehicle for opening minds. “When you are moving your body and you hear something, it goes in deeper than if you were just sitting still,” observes Nick. Once everyone is moving, the audience is halfway to absorbing Baracutanga’s message of community, pride and cross-cultural unity. .

Baracutanga is touring soon. At every stop they will be leaving behind sweaty audiences and, hopefully, the world a little closer to their harmonious ideal.

Volver Atrás finds the seven-member Albuquerque band returning to the raw, rhythmic South American sounds that have brought them a reputation for leaving audiences delighted, but exhausted from dancing. On this outing they are digging even deeper into the deeply rooted musical genres that insire pthem. Baracutanga interpret and mingle folkloric genres such as Brazilian samba and forro, cumbia, Andean huayno, and Colombian chande to create the perfect sonic blend for an album about where we all come from and where we are going.

Importados (2015): Recorded in Albuquerque, NM, Santa Fe, NM and Cadiz, Spain, their debut full-length studio album, Importados was released in September 2015. With multiple regional awards and recognition, performances across the Southwest, Midwest, Rocky Mountains, and California, with stops in Calgary, NOLA, Austin, and México, and an ever-growing fan base, New Mexico-based Baracutanga is ready to spread their fresh mix of South American flavors to national and international audiences.