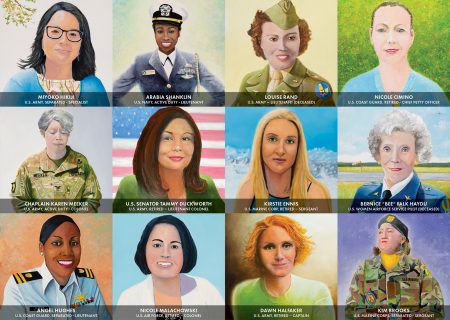 Santa Fe Community College will host a reception from 4:30-6:30 p.m. Thursday, Nov. 10 to highlight the national “So Proudly She Served Portrait Series” in the Main Entrance at the college, 6401 Richards Ave. In conjunction with the national exhibition, SFCC Veterans Legacy Grant Program (VLGP) will also feature information about eight New Mexico women interred at Santa Fe Veterans National Cemetery. The exhibition will run through Nov. 22.

Director of Art on Campus Linda Cassel said, “SFCC is honored to feature the “So Proudly She Served Portrait Series,” which pays homage to nationally distinguished women who served in the military. We’re also pleased to work with SFCC’s Veterans Legacy Grant Program to highlight and remember some of the many New Mexico women who served.”

In addition to SFCC and SFCC’s VLGP, reception sponsors include:  New Mexico Military Museum Foundation, Santa Fe Hispanic Chamber of Commerce and Mike and Molly Droge. Dignitaries, as well as the public, have been invited to attend this free event.

About the “So Proudly She Served Portrait Series”

Nationally recognized artist, Steve Alpert, and Project Director and former military aviator, Linda Maloney, have worked tirelessly to put together the first-of-its-kind portrait group that honors the courage, strength and selfless service of women in active duty, as well as veterans. Alpert painted 12 oil paintings included in the Proudly She Served portrait series. The series features large-scale portraits of extraordinary women military officers and enlisted personnel from each branch of the service. The portraits convey a message about each woman’s courage, strength, resilience and selflessness while serving in the military and in their lives as civilians.

The series also includes a beautiful coffee table book titled Proudly She Served Portrait Series, soon to be published, with captivating stories highlighting the portrait participants, offering a glimpse into why these women chose to serve in the military and why they are proud of their military service. Each woman’s perspective is uniquely different, but together they tell a bigger story and passes on a lasting legacy to inspire future generations to reach for their dreams. These everyday heroes have made significant contributions to their country through their service. The series of compelling portraits and their captivating stories are certain to inspire generations of women to follow in their footsteps. Alpert, executive director of the project, said, “I began this project to tell the story that women in uniform are just as courageous and capable of leadership as men in uniform. Simple as that. I wanted to contribute to telling their success stories through portrait paintings in oil.” Alpert reinvented himself as a professional landscape and later portrait artist after working nearly three decades in the TV news industry. He has created many artworks with military themes. You may find more about the artist at stevealpertart.com.

Proudly She Served project director and former military aviator, Linda Maloney, said the portraits and book “present a very positive message about these inspirational women who achieved significant careers in our country’s military. The women are very resourceful, innovative and deeply caring advocates for military veterans, especially those men and women who are transitioning to civilian life. They are also amazing role models for women who are focused on serving their country, families, or communities while engaged in meaningful careers.”

The portrait series participants include a diverse group of active-duty U.S. military and veteran women from the Army, Air Force, Coast Guard, Marine Corps, Navy and Women Airforce Service Pilots. They are:

For more about the series visit the Proudly She Served website.

For more information about the reception, contact Director of Art on Campus Linda Cassel at 505-428-1501 or by email at Linda.Cassel@sfcc.edu. To learn more about the SFCC Veterans Legacy Grant Program contact Stephen Martinez, Ph.D., at 505-428-1516 or email stevemartinez4@sfcc.edu.