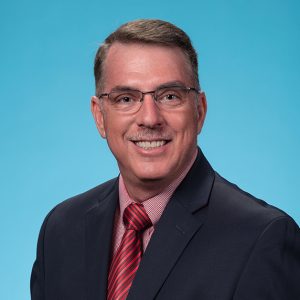 Santa Fe Community College has selected James Wysong, Ed.D, as the new Dean of the School of Liberal Arts and the School of Arts, Design, and Media Arts. The college’s previous dean, Bernadette Jacobs, Ph.D., retired in January. Wysong and other candidates participated in open forums on campus in February and early March. He will begin working at the college in July.

SFCC President Becky Rowley, Ph.D., said, “We’re delighted that Dr. James Wysong has accepted the position. He has a strong background in community college education both as a faculty member and an administrator. He is committed to student success. The college welcomes Dr. Wysong.”

Margaret Peters, Vice President for Academic and Student Affairs, said, “We look forward to working with Dr. Wysong, an accomplished administrative leader who is well-versed in multiple facets of academic operations including curriculum development and delivery, strategic planning and assessment, and the recruitment and professional development of a diverse and caring faculty and staff. He also brings experience in leading efforts to increase the recruitment, retention and completion of minority students, particularly Hispanics, at his current institution.”

Wysong is thrilled with his selection. He said, “As a community college graduate myself, I truly appreciate and embrace the important role of the community college, which is so well-stated in SFCC’s mission: To Empower Students and Strengthen Community. When I visited SFCC for my interview, I was impressed to see the focus on student success and community partnership reflected everywhere I looked. It was the people that I met that day though, who made the greatest impression. It may sound cliché, but there was a real sense of “family” in the way everyone interacted. After I left the interview, I called my wife from the parking lot. I started out by telling her, “This is the place where I want to work.” When she asked me why, I told her, ‘because I already feel that this is where I belong.’ ”

Wysong currently serves as the Dean of Associate of Arts for the Dale Mabry Campus of Hillsborough Community College in Tampa, Florida, a position that he has held since 2013. Prior to that time, he was a faculty member and the department chair and science program manager at the Brandon Campus of Hillsborough Community College.

Wysong first joined the faculty of Hillsborough Community College in 1988, as a part-time instructor. He progressively advanced in rank during the years that followed, ultimately earning the title of Professor of Earth Science in 2010. During his tenure as a faculty member, Wysong served on many of the college’s major committees, including General Education, Academic Affairs, and the Campus and College-wide Tenure and Promotion Committees. He also served on the faculty union council, and was the vice-president and chief negotiator for the union at the time of his selection as dean. As a member of the administrative bargaining team, he remains active in collective bargaining, negotiating on behalf of the college with both the full-time and part-time faculty unions.

Through his professional interests, Wysong has been involved in numerous environmental and geographic education projects and workshops, as well as curriculum reform projects at the state and national level. As a Course Director for the NSF Chautauqua Program, Wysong has conducted field programs for college faculty members in Iceland, Greenland, New Mexico, and the Florida Keys.

As a dean, Wysong has been successful in developing and managing numerous grants and initiatives focused on increasing the number of women and minorities in STEM, and in improving the retention, success, and completion of Hispanic students in college transfer programs. These projects include a $6M Department of Education Title III Hispanic Serving Institution grant, and a Louis Stokes Alliance for Minority Participation (LSAMP) grant – Tampa Bay Bridge to the Baccalaureate.

Wysong’s academic background is in the geosciences. He earned his Associate of Arts degree at Valencia Community College in Orlando, Florida, before going on to earn undergraduate and master’s degrees from the University of South Florida in Tampa. He also holds an Ed.D. in Higher Education Leadership from the University of the Cumberlands in Williamsburg, Kentucky. His dissertation topic was “Developmental Mathematics Education Reform Initiatives in Florida: Impacts, Consequences, and Changes at a Large Metropolitan Community College.”

Born and raised in a small ranching community in Central Florida, Wysong grew up in the shadow of both the Space Program and Walt Disney World. A frequent visitor to New Mexico, he has friends in Santa Fe and Albuquerque. He owns land in the East Mountains. In his spare time, he enjoys woodworking, photography, the outdoors, and his lifelong passion for aviation. A pilot since the age of sixteen, Wysong enjoys both the freedom and challenge of flying.