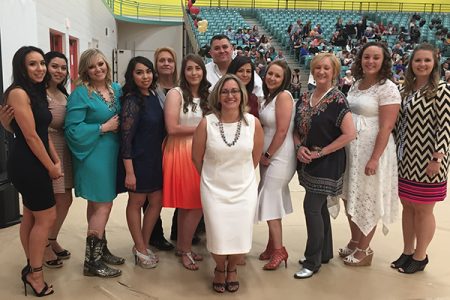 On Thursday, May 11, a celebratory pinning ceremony welcomed 48 nursing graduates, including 12 students who had come from ITT Tech after it abruptly closed.

Kicking off the festive ceremony was a surprise for Dean of School of Sciences, Health, Engineering and Math Jenny Landen. Dr. Nancy Ridenour, Nurse Practitioner, Fellow of the American Academy of Nursing, and Dean of the School of Nursing at the University of New Mexico was introduced by President Randy Grissom. She announced a new endowment that she recently established at Santa Fe Community College Foundation to honor Dean Jenny Landen: the Jenny Landen New Mexico Nursing Education Consortium Project Support Endowment, which will provide funds for students, faculty and program expenses with preference for NMNEC work being done in conjunction with Santa Fe Community College and UNM’s Schools of Nursing.

There were the usual tears of joy, but particularly grateful were the ITT Tech students, who thanked Interim Nursing Director Terri Tewart.  Tewart, herself, was tearful to see this day finally arrive for her former ITT Tech students and she thanked SFCC as the only nursing school in the state to accept the students. The joyful moment was captured in this report on KOB-TV.

Congratulations to the following graduates who were pinned.: