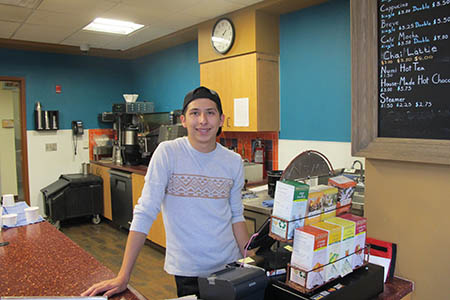 Carlos Lira, 20, is the friendly face that you’ll see most days at the East Wing Eatery.  Lira is studying to earn his associate degree in business administration.

Lira has spent about four years working in coffee shops.  “My interest has turned into a hobby, almost an obsession,” Lira said.  He loves the intricacies of making coffee drinks for customers. He also will talk to customers to suggest coffee drinks that he thinks would suit their tastes.

“I used to be incredibly shy, but now I enjoy talking with customers,” Lira said.  He speaks readily with his customers in English or Spanish depending on their preference.  “I used to be reluctant to speak in Spanish, but now I like that I can relate well to Spanish-speaking customers,” he said. He has several regulars who stop by the East Wing Eatery.

“Sometimes, I know people are having a rough day and I’m glad when I can just share a smile with them. I also like to take time and have a cup of coffee with the culinary arts volunteers,” he said.

While he was born in this country, his parents immigrated from Mexico.  He said he recognizes the struggles of immigrant students and employees.  His childhood was challenging. He and his mother and siblings spent a year in a shelter in Santa Fe when his father’s status was questioned. “I became withdrawn then. That’s when I hardly would speak in either English or Spanish.  It was a hard time.”

“I think one of the reasons I love to drink coffee is that it’s one of things I’ve enjoyed with my Mother. We’d have a cup of coffee together in the morning,” he said. The relatively easy-going Lira says that caffeine has never affected him like some people, so he regularly enjoys coffee.  When he has the opportunity, he stops by the variety of coffeeshops in Santa Fe to sample drinks.

He worked at a variety of coffeeshops, but the place where he fell in love with the variety of brews was at the Holy Spirit Expresso on Burro Alley.  “So I worked with this giant expresso machine in a very small shop, but I was amazed at all I could create with one machine,” Lira said.  “Learning about coffee is a real science. I spend my free time learning more about coffee.”

His dream is to ultimately own his own coffee shop.  While he’s not a culinary student, he understands the work and dedication of people working in the industry. “My father, uncles and other relatives all work as cooks in restaurants around town. They work very hard, but there’s always great food at all of our family parties.”

Lira works with a team of culinary arts volunteers who serve as interns in the East Wing Eatery.  Chef Patrick Mares oversees the eatery and said, “Carlos is great. We’re lucky to have him working here.” Lira is also grateful to work at the college. “I previously worked with Brian Erle, the culinary arts technician and he recommended me for the job,” Lira said. “I like working at the college since I’m able to fit in work between classes and homework.”

After completing his associate degree, he plans to get a bachelor’s degree from New Mexico Highlands University at the Higher Education Center.