Amorette Seul sat on the porch and watched as darkness turned purple, then pink, then exploded as birds and colors awoke. She hadn’t been sleeping and her dry, burning eyes confirmed that this night was no different. She missed the sounds of him making coffee, or running a shower, or frying up some meat for breakfast. There should have been the smell of his aftershave in the air, or the sweet odor of bacon, or the musk of his sweat after his morning run.

Instead, there was only silence. She made the coffee herself.

Three days ago he came down the stairs and said, “All my bags are packed, and I’m ready to go.”

“On a jet plane?” she asked, flashing to that old song.

“What?” he distractedly muttered as he surveyed the room to make sure he hadn’t missed anything important; his light blue eyes looked almost green as they swept around, passing over her briefly.

“Nothing, never mind. Have they told you where you’re going, who she is?” Amorette put down her book and patted the couch next to her.

He walked to the kitchen instead and looked around in there as well. He stuck his head back in the room, holding his body against the doorframe. “No. I don’t like to ask. I was surprised when I met you, and look how well that worked out!”

He picked up his bags and began walking to the door, stopping in front of her. Touching his heart as was custom, he looked her in the eyes and offered the traditional greeting, “I Believe In Love.”

Amorette touched her heart with two fingers and nodded. She had been taught the proper way to respond since childhood, and she didn’t even hesitate in answering, “Love Is All You Need.”

Amorette was turning thirty-five on Thursday. That meant she had four days left of her transition week before her birthday. Four days before the next one was here. This transition week was supposed to be for prepping  oneself: dye your hair; rescan your eyes for new sparkles; throw out the old memories; hire a cleanser to go through the house for old mementos; buy a new wedding dress, of course; pick out the theme for the party; and get to the government building to remove your last name.

The love scribes say it takes seven days to get ready for the new one and seven years before the new one becomes the old one. The body replaces its cells entirely in seven years. The scribes were the scientists and psychologists who cracked the biology of the love code and realized that with a new body comes the need for a new love.

After her morning coffee, Amorette squared her shoulders and decided to try to tackle her to-do list. As she left the house, though, her mind flashed to another man, not her recent love, but her first. He was fourteen and she was thirteen; he sat behind her in class. He played with her hair when it fell on his desk, and he had the most beautiful dark eyes, framed with lashes that closed like curtains when he blinked. She shook her head, knocking the memory out.

She stopped and turned to see Aiko, her neighbor, waving from across the street. Taking a deep breath, she smiled and waited for Aiko to catch up.

“Ammie! How are you? Where are you going? What are you doing? Isn’t it a beautiful day? Stephen, my Love, said it was too beautiful a day to not go for walk so here I am walking!” Aiko always asked questions all in a row. Amorette laughed and put her hand on Aiko’s shoulder.

“Good morning, Aiko. Yes, it is a beautiful day, and I’m glad you’re able to enjoy it.” After a year of being neighbors, Amorette had finally figured out that she could just pick one of Aiko’s many questions. She always tried to pick the most innocuous one.

Aiko was twenty-three and had more energy than the sun. Stephen was her first husband. It was obvious to Amorette that Aiko had never been through a transition before, never seen how easy it is to be replaced.

“Are you excited for your new Love? Have you seen what he looks like yet? Have you picked a theme for the party? Have you gotten your dress? I want to do a princess dress next time I get married. I can’t wait.” Aiko fell into step with Amorette as the two began walking down the block.

A fevered breeze picked up the hair on her neck and Amorette felt a wave of solemnity surround her. She looked around and lowered her voice, captivated by a feeling of honesty she hadn’t felt in a long time. “I haven’t seen the new one yet. And honestly, I don’t know if I want to. I want….” Amorette paused.

Aiko slid her arm through Amorette’s. “It’s okay, Am. I bet old genetics are making you nervous. But you know the stories: our forefathers believed in mating for life. Divorce rates skyrocketed until no one married anymore. The population plummeted because reproduction rates fell. Now we know better. Once you meet your Love, I’m sure you’ll feel better.”

Amorette shook her head. “I want to…I mean…” She took a deep breath and plunged ahead. “I don’t want to get married again.”

Aiko stopped short. “Amorette! What are you saying? Of course you want to get married. Everyone wants to get married. You would be so lonely without your Love. You must be nervous, is all. Don’t say that!” Aiko patted her friend’s shoulder. She touched her heart and said, “Love Is All You Need.”

That night Amorette couldn’t sleep again. When she closed her eyes she saw visions of the dark-eyed boy. This time they were walking out of class together. He offered to carry her books for her. She could see his blue shirt, the wrinkled collar lined in white. He kept looking at her with his dark eyes, a gentle smile playing across his face every time she met his gaze.

The next morning, Amorette was supposed to go to a lunch date with her mother followed by her dress alteration meeting and then the party planner. Instead, she stayed in bed and gave herself over to the dark-eyed boy in her dreams. Kissing, behind the school, in the rain. Skipping school together. Making out in the parking lot. A teacher appeared, yelling at them, pulling them away from each other. She jerked awake at the pain of separation.

For two days, Amorette sought the dark-eyed boy, to find him, touch him, hold him. She spent her sleeping hours trying to recapture a memory and her waking hours feeling him fade from her consciousness. Like an addict, she thought only of him.

Morning came again. She heard the door open, registered the sound of stilettos piercing through her dreams, and opened her eyes seconds before her mother turned on the lights.

“Amorette! What in Love’s name are you doing? Honestly, there is no time for these kinds of theatrics.”

Her mother was a beautiful woman on her seventh Love. Amorette spoke to her twice a month during their hour-long lunch dates. The hour always progressed in the same manner: her mother would tell her about a new city her husband had taken her to; Amorette would talk about a clothing sale she discovered. They would order salads with the dressing on the side and afterwards Amorette would stop and buy a hamburger on the way home.

The women considered themselves very close.

Their routine was established after Amorette’s father was reassigned. Amorette’s mother birthed her during her third Love. Women are able to have children during their second, third, or fourth Love. Children are raised by their mothers, but most fathers still spend special occasions with their birthing family, even once they have a new Love. Growing up, Amorette’s father sent Valentine’s cards every year.

Right now, Amorette did not want to talk about clothing sales or vacations with her mother. She pulled the covers over her head. Tearfully, she called out, “Maman, please go away.”

Her mother sat down on the bed next to her. She flipped the covers back down and reached out as if to smooth Amorette’s hair down, but dropped her hand before contact was made. “What are you doing, daughter?” Amorette sat up against the headboard. “I miss him. I feel empty. Alone.”

Her mother listened in silence while Amorette mourned a lost piece of childhood and lamented a fear for the next Love. She heard her daughter yearn for a boy from twenty years ago and doubt in the power of a future man. When Amorette had finally exhausted herself, she clapped her hands and beckoned her child.

“Okay, girl. I hope that’s all out of your system now. Nothing comes from this behavior and memories of long ago are pointless. Now, let’s get you up.” She pulled Amorette from the bed and pushed her along into the bathroom. “Run a shower.”

Amorette stood in the shower a long time. The sadness flowed in her blood like the water did over her body. She could feel it relocating from her heart to her head, from fingertips to toes and back again.

After a while, her mother came in and turned off the water. She wrapped Amorette in a towel and sat her at the vanity in the bedroom. When Amorette’s tears slowed, her mother blow-dried her hair, wrapped a soft cream-colored summer dress around her body, and rubbed vanilla lotion into her arms and legs. She leaned forward and wiped the tears from Amorette’s cheeks and then applied her makeup. She put Amorette’s feet into gold and cream shoes and pulled Amorette up to standing. Her mother led her by the hand down the stairs and into the kitchen where she sat her at the dining table. Amorette followed her silently, blankly.

Suddenly the doorbell rang and Amorette jerked, glancing questioningly at her mother.

“You know who it is. It’s been seven days, Amorette. Come on now. This will help,” her mother said encouragingly, nodding towards the door.

Amorette stood slowly, shaking slightly, and inched closer to the door. She knew her role; she had played it before, but still she hesitated. The door swung open and she met the bright blue eyes of the man on the other side.

“Hello! Amorette, right? Hi, I’m Andrew.” He coughed, clearing the nerves from his voice. He spoke again, touched his heart and nodded, adhering to formalities, “Love Is All You Need.”

Amorette felt the immediate effects as hormones flooded her mind. Lightness and giddiness spread into her whole body. Unconsciously, her mouth lifted at the edges and her pupils dilated as they looked into his blue depths. Andrew’s voice was deep and kind and her stomach automatically contracted at the sound of it. She smiled and responded, “And I Believe In Love.”

Andrew took her hand and leaned down to kiss her gently. As her eyes fluttered closed for a brief moment, she worried that the dark-eyed boy would still be there behind her lids, but all she saw were fireworks as her new Love pressed against her.

“I Believe In Love,” she sighed again. 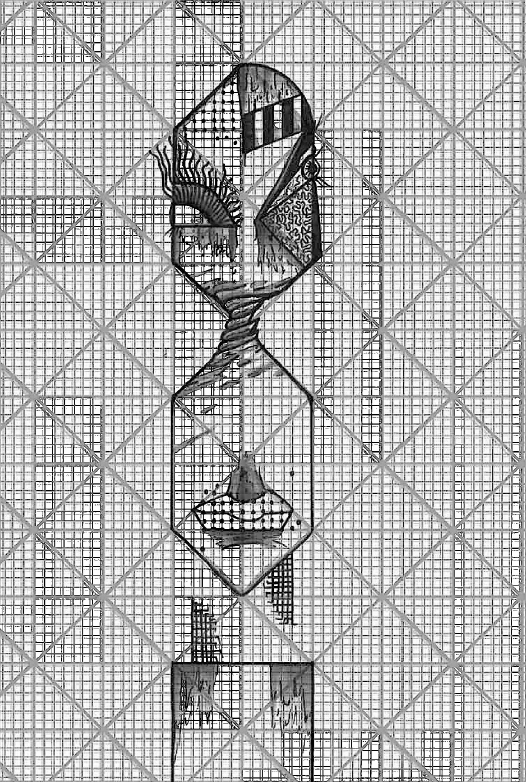