the sun in an act of grace

dips a sleeve through the frost

relaxing the air and the woman with an ax

near the pile of fresh cut wood

in front of the pale unshuttered house

the trees have gathered, dark

and down, dropping leaves

in the house shadowed

come the clear voices of women at dusk

a chorus of common flowers in winter

in the kitchen warm arms

over the bones of water

tend to the cauliflower

the yam the bean

while the spider in the corner of the window

dips against the smoke, dancing to her dinner

on the strings of her iridescent music

composed in a sinister language of threads

the heat gathers into smells

and later the sharp exhales of the unexpected

in the morning a woman opens

the door to leaves on the stairs

the cupped hands of leaves on water

the cascading sounds of leaves against wood

while a leaf rests in the hood

of a thick red jacket

and beneath a north sky

a woman lifts an ax 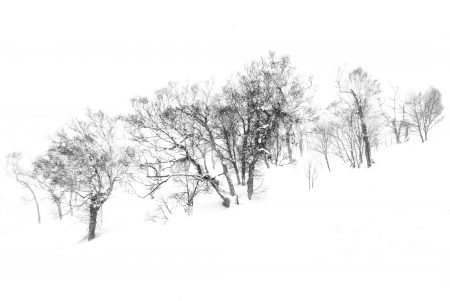