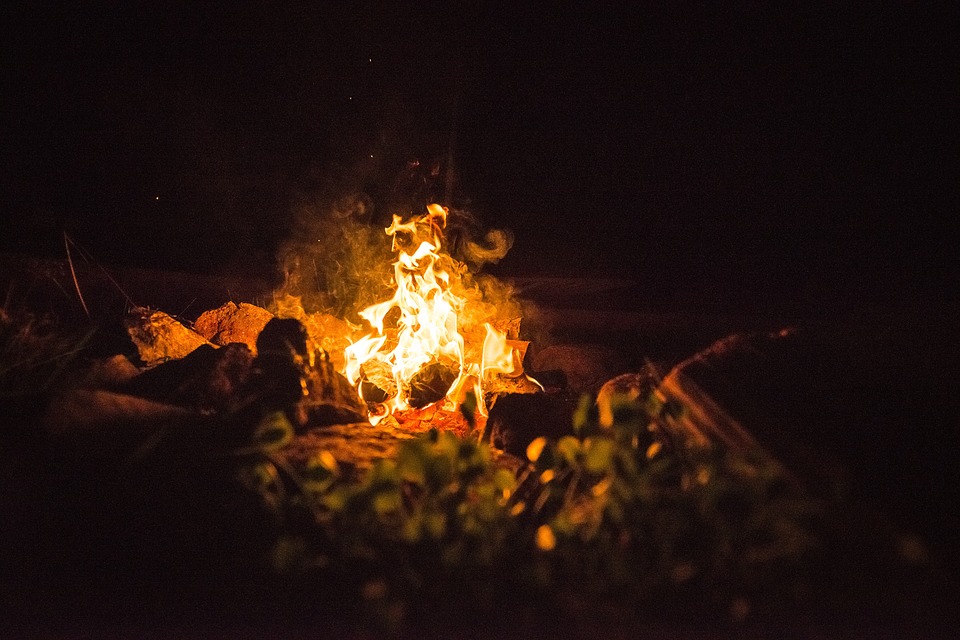 My mother could be overbearing but I’ll credit her for this: she organized and carried out our family camping trips. There were five kids: William, two years older than me, Barbara, two years younger, Margaret, a year below that and James, two years yet younger. This was no minor undertaking. We had a green Plymouth station wagon (slept two) and a fold-out trailer tent (slept five). And luckily we all began camping during the era of grocery-store S & H Green Stamps. We turned in book after book of those licked-in stamps to get outfitted in Coleman. Granted, the sleeping bags were those lumpy cotton ones and the air mattresses had those little tiny holes you had to blow and blow into, leaving the kid on air mattress duty a little hyperventilated, but, ah, those Coleman lanterns, that Coleman stove, the flashlights, camp stools, nesting cooking pots and aluminum plates. S & H Green Stamps left us camping-equipment rich. There were other things, of course, that needed to be organized – food, for example; clothes, for example. Two weeks before the trip, my mother would stand there with her clipboard with all her magic-marker-labeled crates around her. “Towel box,” she called out. “Seven towels, seven wash rags and everyone’s swimsuit.” And we, her indentured servants, would go out and gather them up. There was a tool box, and air mattress box, cook kit I, cook kit II, coat box, food box I, food box II, and three suitcases which included all the daily folded-together outfits, socks and underwear included. All of this would get fitted into the trailer and what was left went on top of the car.

And once we got ourselves and all those maps into the car, we took off for two weeks of America. In the span of our childhood, we hit all forty-eight states.

In the car, there was an egalitarian system going: we rotated seats – three in the front, three in the middle, one in the back-seat-facing-backwards. If you were sixteen or older, you drove exactly two hours during your turn and if you were in the front seat, you helped with the navigation. This being before the time of car air conditioners, all the windows were open.

There were, of course, mishaps. I remember one story going like this: Margaret, in the back-seat-facing-back started feeling sick after eating too much Shenandoah apple candy so she got put in the front seat. She threw up out the window and aerodynamics being what they were, it all whished right through the window of the middle seat onto Barbara. But both James and William told me I got it all wrong. We’d just stopped at a gas station, they said, had plenty of time for everyone to go to the bathroom. But when we’d headed out, after just a little while James said he had to go to the bathroom real bad. He was in the second seat. My father handed him a Dixie cup. And the emptied-out-the-window-Dixie-cup-full-of-pee travelled all the way to the very back opened-up window of the car where Barbara (at least we agree on this part) was sitting. Barbara got the front seat for a few turns and we all quit sending anything out of any of the windows.

We did lose a kid every now and then. In Vicksburg, we left James at the Piggly Wiggly. We only noticed he was gone when, a few miles out of town, my father, at the steering wheel, said, “James, I thought I told you to make sure your mother got some ice. James?” And so it went back through the car, “James?”, “James?” When we got back to the Piggly Wiggly, he was just sitting there on the curb, waiting, not particularly perturbed.

It was right around then, on the Gulf Coast, that Barbara and Margaret decided to try their luck at getting a Southern tan, thinking that the Southern sun didn’t know they were of straight Scottish descent and never got anything darker than pink. By the end of the day, they were bright red with Barbara’s eyes swollen shut. Now that was something for the photo album.

When we got to the campgrounds, there was another routine that went into play. As we drove around the grounds, should we spot a place we sort of liked, my parents would drop off a kid to sit on the picnic table. They could hold up to five sites that way, then choose the best one before picking up all the other kids from the unchosen sites before the park rangers showed up.

At a campsite near Mobile, Alabama, James went missing again along with William. It seems they lost themselves in the woods by the campsite along about sunset. After a lot of wrong-headed attempts to find their way back, they decided to use the Underground Railroad way by following Orion in the sky. It turns out that Orion is kind of a vague direction to head. But it did get them to a ranger’s house who knew something abut getting them back to the campground.

This was the mid 60’s, the centennial of the Civil War. We toured, I swear, every Civil War battlefield in the South. And, in between stops, my mother read to us from all her collected-up Life Magazine Civil War articles.

It also happened to be the time of the Freedom Riders. One night, in some campground mid-Mississippi, flashlights started flashing all around our campsite. Then the tent fly got whipped open and flashlights flashed all over us. State policeman, of a sort, were behind those flashlights. “We’re just checking,” one of them said. “We’re just trying to protect you good White folks.”

There were still Colored restroom even in the 60’s and James, again in dire need to relieve himself, picked the bathroom most convenient. He says it was Colored Men’s, but the way William tells it, it was Colored Women’s.  Anyway, no one gave him any trouble.

We went to Shiloh, Pickett’s Run, Appomattox Court House. Saw the great cities Sherman burned on his march to the sea. At Gettysburg, we walked the tombstones and, prompted by my mother, took turns saying lines from the Gettysburg Address. War is a cruel thing.

At night we’d find a campsite, haul up the tent, blow up air mattresses, and cook up some canned spaghetti with ground beef. It’s something you have to do all together, each one picking a job that hasn’t been done yet.

Of course, there were problems to solve. Like the air mattress that always went down – we put that one under Margaret because she slept the soundest. Or that one night when the bugs were so awful we moved all our lights to the next campsite over and just moved around in the dark at our own campsite.

And there were times when we’d spend the whole day hanging around some garage because our great, green Plymouth station wagon had broken down. Odd, that that day should play out as important in my memory as the day we toured Monticello or swam in the Gulf Coast. There was something about us all there together, taking it as it came, figuring it out as we went along.