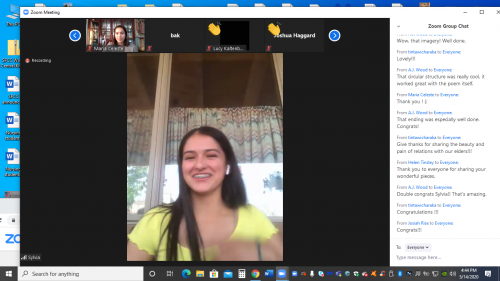 Sylvia Pincheira reacts to the news that she was the $1,000 recipient of Santa Fe Community College Foundation’s Richard Bradford Memorial Creative Writing Scholarship. the $1,000 scholarship.

Santa Fe Community College’s emerging writers, photographers and mixed media artists were recognized during the Katie Besser Student Awards celebration hosted online by the SFCC Library on May 14. The awards were named for the late Katie Besser in recognition of her love of literature and creative writing. The event celebrated students’ creative expression through writing, photography and media arts. Writers representing SFCC’s diverse community read from their winning works.

The tenth annual winner of Santa Fe Community College Foundation’s Richard Bradford Memorial Creative Writing Scholarship was announced at the conclusion of the awards celebration. Sylvia Pincheira is recipient of the $1,000 scholarship. Named for the author of the 1968 classic Red Sky at Morning, the scholarship was initiated by author Michael McGarrity, arts advocate Charmay Allred and former Santa Fe city councilwoman Rebecca Wurzburger.

Special thanks to Emily Stern who led the celebration, Val Nye who hosted it via Zoom at SFCC Library, Liberal Arts faculty (English & Media Arts) who participated and Kelly M. Smith who announced the recipient of the Richard Bradford Creative Writing Memorial Scholarship on behalf of SFCC Foundation.

Thanks so much to SFCC Foundation’s support of the Katie Besser Student Awards. Winners received $75, Runner-ups received $50 through Amazon ecards.

Read a history of this event.

See all the winning photos and writing award winners here.

Photo: Sylvia Pincheira reacts with excitement to the news that she is the recipient of the Richard Bradford Creative Writing Memorial Scholarship in this screenshot from the celebration.