Two members of the International Council of Thirteen Indigenous Grandmothers, Pauline Tangiora and Flordemayo Hall, visited SFCC in November. Stephen Gomez, Luke Spangenburg and Charlie Schultz gave the party a tour of the TATC, greenhouses and discussed workforce training for the young in the new energy economy. 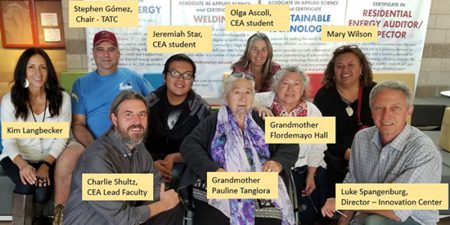 Pauline Tangiora was traveling through New Mexico along with Flordemayo Hall, presenting in a number of locations including Santa Fe Community College, the United World College, Desert Academy and Santa Fe Community Foundation, on her way to receive the Bremen International Peace Prize.

Pauline Tangiora is an Earth Charter Commissioner and former president and currently vice president of Women’s International League for Peace and Freedom, Aotearoa. A former representative for the World Council for Indigenous Peoples, life member of the Maori Women’s Welfare League and a committee member of Rigoberta Menchu Tum’s Nobel Laureate Indigenous Initiative for Peace. In 2005, she was nominated for the Nobel Peace Prize as part of the 1,000 Women for Peace Project. Pauline is one of the 50 council members of the World Future Council and ambassador of the International Council of Thirteen Indigenous Grandmothers. She is one of the founding members of Rising Women Rising World. One of the greatest success stories of her tireless lobby work for the rights of indigenous people took place only a few months ago. In November 2016, the Crown apologized to the Maori for stealing their land and for destroying their cultures. In addition, they signed a treaty for compensation payments and social support. More than thirty years ago, Pauline Tangiora initiated such a campaign which, thanks to her perseverance and tireless commitment, has finally proved successful. She is one of three recipients of the 2017 Bremen International Peace Prize.

Flordemayo Hall is originally from Nicaragua and currently resides in Estancia, NM. She is a Curandera Espiritu or healer of the divine spirit. She has spoken all over the world on a wide range of topics, offered ceremonies and is one of the founding members of the International Council of Thirteen Indigenous Grandmothers. She is part of the Wisdom of the Grandmother’s Foundation and is a recipient of the Martin de la Cruz Award for Alternative Healing, a prestigious award given by the International Congress of Traditional Medicine. She is the founder of the International Institute for Natural and Traditional Knowledge, dedicated to preserving and sustaining native plants. She is the founder of The Path, a social benefit organization dedicated to the preservation of traditional knowledge and heritage seeds. Flordemayo maintains a seed bank and holds gatherings to further educate and raise awareness of the importance of seeds. Flordemayo is a woman of prayer who considers her Mayan heritage to be the keystone of her work.