Great things are growing at SFCC’s Early Childhood Center of Excellence (ECCOE), which opened last fall and already has reached milestones in its mission to improve the quality of early childhood education across New Mexico.

From transforming the early childhood workforce — including teachers, day care operators and home providers — to offering year-round care and education to children attending the on-site Kids Campus, ECCOE is making a difference in children’s lives.

“The only way to improve child outcomes is to expand the professional development we’re delivering to the adults who teach them,” says ECCOE Director Dr. Jennifer Duran-Sallee, who brings a wealth of experience to the job, including eight years in Santa Fe public schools as a principal and administrator. “One of the center’s principal goals is to provide continued support for the development of early childhood leaders in New Mexico.” 2 FEATURE SFCC’s Early Childhood Center of Excellence Improving Child Outcomes by Transforming the Early Childhood Workforce in New Mexico.

Other initiatives include a workshop series for infant care providers and home visiting and another, offered in English and Spanish, for people interested in opening a business in early childhood education such as a day care center. A Perkins grant for early childhood education will be used to develop the Family Infant Toddler Track to certify home visitors along with grandmothers, aunts and others in the Friends and Family Network to work with new mothers. 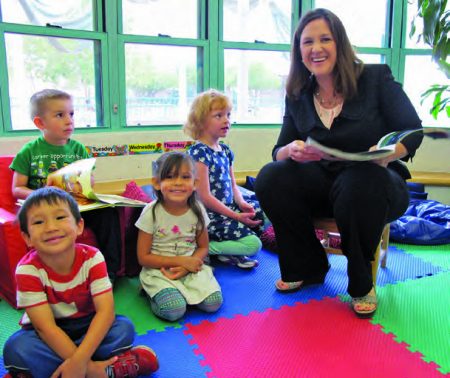 The endowment of $1.4 million is comprised of funds from several foundations as well as the State of New Mexico. The center was especially proud to be awarded a matching grant of about $400,000 — the highest amount given to a community college — from the New Mexico Higher Education Endowment Fund.

As a leader in early childhood education, the Early Childhood Center of Excellence in August will host a free professional development institute on early childhood, culture and diversity, and best practices in education. Another will be held at the end of September on transforming the early childhood workforce. Now under the ECCOE umbrella, the college’s early childhood development center, Kids Campus, provides a nurturing, positive learning environment for children 8 weeks to 5 years old. Recently re-accredited, Kids Campus is a 5-Star center, earning the Platinum level.

Since joining SFCC, Duran-Sallee has made significant positive changes and is developing best practices for Kids Campus to become a demonstration site and a robust research site. “Children develop by exploring their environment, making discoveries, asking questions and forming ideas about the world around them,” says Duran-Sallee. “Our goal is to honor each child and his or her family by working with them as partners to create an enriching setting for the children. We are committed to the diverse population of our center and the community, and respect and respond to the needs of each family.”

Duran-Sallee’s enthusiasm for her work is apparent in all of the ECCOE’s accomplishments in mere months. And while she loves her job with a passion, there’s another reason she enjoys coming to work every day. “My four-year-old daughter is here,” she says, with a big smile. “It’s definitely rewarding to see her experience the quality that I see, and there’s no better way for me to support the center than to bring Violet here.”