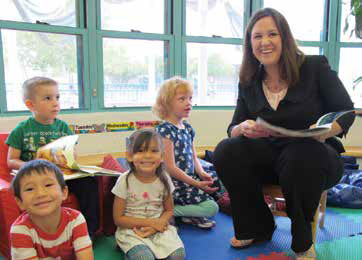 Early Childhood Center of Excellence Director Jennifer Duran-Sallee is an energetic leader in the effort to reshape early childhood education in New Mexico.

SFCC has established the state’s first Early Childhood Center of Excellence, with input from an advisory committee. The center will expand outreach to those who educate our youngest community members, and provide professional assistance to help them succeed. Jennifer Duran-Sallee, Ed.D., has been named the center’s director.

“New Mexico ranks near the bottom in the nation for child well-being outcomes,” Duran-Sallee said. “Quality early childhood education can change those outcomes. And those changes can impact a child’s future and positively affect our community as a whole.” The Early Childhood Center of Excellence will focus on increasing academic programs, including dual credit options for high school students; developing the college’s Kids Campus as a lab and demonstration site; supporting early childhood businesses; and advocating for policies and funding to support early childhood development.

Duran-Sallee brings a wealth of educational experience, including with Santa Fe Public Schools: as the principal at Nina Otero Community School and at Carlos Gilbert Elementary, assistant principal at El Dorado Community School and as an administrator. Prior to that, Duran-Sallee worked at the New Mexico Public Education Department. She holds a bachelor’s degree in Agricultural Biology from New Mexico State University, a Master’s in Public Administration from Texas State University and a doctorate in Educational Leadership from the University of New Mexico.

“SFCC’s Kids Campus has a 5-star rating (the best possible). It will be a terrific resource for our work as we reshape early childhood education for New Mexico,” Duran-Sallee said. Through the SFCC Foundation, the center has received support from Brindle Foundation and is the recipient of a $400,000 challenge grant from the State of New Mexico.