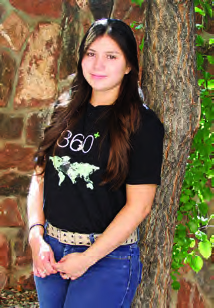 Ricardo Caté, whose popular “Without Reservations” cartoon runs daily in the Santa Fe New Mexican, will address SFCC’s 2016 graduates at the commencement ceremonies on Sat., May 14 at 2 p.m. at the Santa Fe Indian School Pueblo Pavilion. Caté of Kewa/Santo Domingo Pueblo is the most prominent Native American cartoonist working today. He creates the only Native American cartoon to appear daily in a mainstream newspaper. Caté says, “My Dad always said, ‘Don’t speak unless you have something to say.’ My cartoons have something to say.” His cartoons are known for their wry, poignant humor. “Some people speak out by protesting and carrying placards. I let my cartoons state what I have to say about issues.” In addition to his work as a cartoonist and artist, Caté is a filmmaker, comedian and popular speaker. He lives at Kewa/Santo Domingo Pueblo and participates in Feast Day dances and cultural events.

Kyle Pacheco, who received an Associate in Applied Science in Culinary Arts in December, will give the student speech. The Kewa/Santo Domingo resident is the sous chef at the East Wing Eatery and recently won First Place at the New Mexico SkillsUSA competition in the culinary arts category. Pacheco noted that attending SFCC has had a huge impact on him. “Chef Michelle Chavez has stood by me since I came to the college and I wouldn’t be who I am without her. Chef Patrick Mares saw my potential and he’s molded me into becoming a leader. Attending the college has changed my life. I came in feeling like a shy stranger and now I’ve gained confidence and feel accomplished,” Pacheco said.

Also speaking at commencement is Antonieta Portillo. The 17-year-old will graduate with a Certificate of Academic Transfer from SFCC one week before her graduation from The MASTERS Program. She plans on returning to SFCC to earn an associate degree in Business. “I love attending classes at the college,” she said. “I enjoy studying with people from all different age groups.” Last year, Antonieta was selected to join the World 360+ Leadership Collective’s trip to India where she participated in a number of educational and service opportunities. The public is invited to the SFCC Commencement. No tickets are required, people are encouraged to arrive early because seating is available on a first come, first-served basis.