Home / Inside SFCC / A Pulse on Healthcare

A Pulse on Healthcare 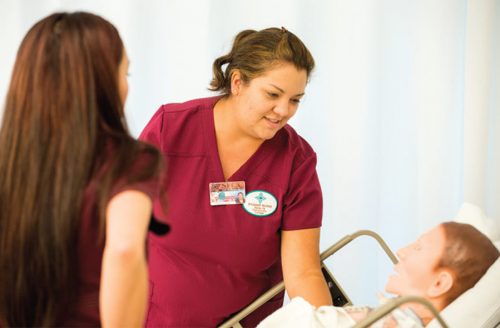 The Sim Labs offer nursing students, such as Jacqueline Herrera, an opportunity to develop critical skills in a controlled environment. 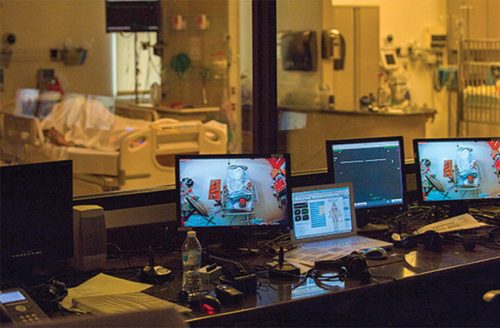 Similar to a hospital setting, students can monitor “patients” in the Sim Lab.

Ashley Archuleta, 26, decided to pursue a health care career because she learned first hand the role of skilled, compassionate care. She was born with multiple medical complications and spent many days in the neonatal intensive care unit.

Archuleta says, “knowing that the nurses put in 110 percent every shift to make sure I was healthy and that I would be able to push through medical conditions that could have ultimately ended my life is what drove me to become a nurse. I want to give back and change someone else’s life the way that those nurses and doctors changed mine.” Archuleta will graduate in December with an associate degree in nursing from SFCC and a bachelor’s degree in nursing from New Mexico State University.

The college is a leader in a national initiative of APIN (Academic Progression in Nursing), which is working to help states achieve the goal of increasing the number of nurses with a bachelor’s degree to 80 percent by 2020.

“We’re in the forefront of this important movement,” Dean of Science, Health, Engineering and Math Jenny Landen, RN, MSN, FNP-BC, said. The college has partnerships with New Mexico State University and the University of New Mexico to enable nursing students to get a bachelor’s degree through an accelerated or traditional program. Last December, six SFCC students were the first to graduate with both degrees, making SFCC the second community college in the state to graduate co-enrolled students. The college currently has about 90 students working simultaneously on their associate and bachelor’s nursing degrees.

Landen says the outstanding health care faculty-staff collaboration with clinical partners such as Christus St. Vincent Regional 2 FEATURE A Pulse on Health Care Associate and Bachelor Degrees Can Now Be Earned Together Medical Center contributes to SFCC’s successful outcomes. In addition, the college’s state-of-the art Sim Labs provide students with a high-quality, hands-on experiential learning environment. “When folks came through from John Hopkins University to tour our Sim Labs, they were impressed. We have one of the largest and best-equipped simulation centers in the region.”

Archuleta refers to the Sim Labs as “a great tool” to apply what students learn and to develop critical thinking skills. The labs are set up like hospital rooms, both for regular and intensive care/ER patients, with standard medical equipment. “We also have dummies that act as patients. They have ‘blood’ running through them, and they are able to talk to us as well,” she added.

Throughout the country, as baby boomers age, the demand for trained health care workers has soared. In Santa Fe County, where almost 20 percent of the population is 65 and older, the demand is even higher than in the rest of the nation.

Fortunately, the college is on track to fill those demands. Graduates from health care programs have dramatically increased from 2010 to 2014. The number of degrees that SFCC students earned jumped from 66 to 128, and the number of certificates they earned rose from 105 to 233. The Nursing Program is just one segment of the health care education spectrum. The college also offers associate degrees in allied health, dental health, paramedicine, medical assisting, respiratory therapy and radiologic technology. Students also can earn certificates in home health/nursing aide, dental assisting, expanded functional dental auxillary, medical assistant, paramedicine, phlebotomy and emergency medical technician (basic and intermediate).

“WE HAVE ONE OF THE LARGEST AND BEST EQUIPPED SIMULATION CENTERS IN THE REGION, PROVIDING STUDENTS WITH AN EXPERIENTIAL LEARNING ENVIRONMENT.”
– Jenny Landen, Dean of Science,
Health, Engineering and Math

Director of Nursing and Allied Health Susan Winter says students interested in health care as a career have plenty of options in addition to nursing. Many are pursuing a second career or returning to school so they can upgrade their skills and obtain certifications. For example, Archuleta first got a certificate in phlebotomy. She worked for three years as phlebotomist before returning in 2013 to study nursing.

Archuleta notes how valuable SFCC’s clinical experiences are. She’s mostly worked on the general hospital floor, but also had rotations in the emergency room and the intensive care unit. With her well-rounded experience and education, she is bound to move swiftly to the top of her profession — something both she and SFCC will take pride in for years to come.