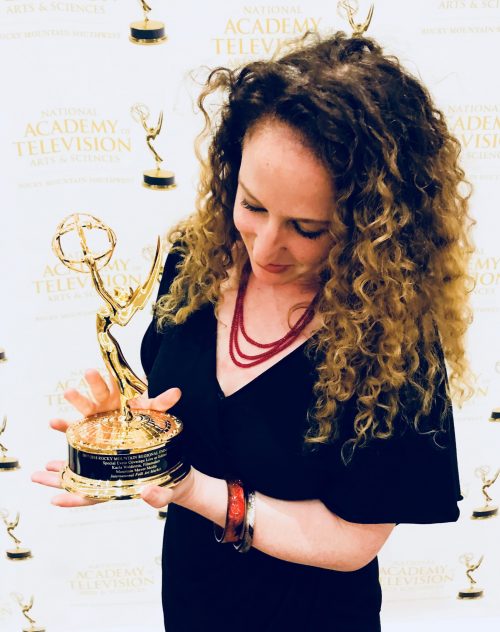 Kaela Waldstein took home a Rocky Mountain Southwest Regional Emmy Award on Sept. 22 in the category of Special Event Coverage Live or Edited for her short film, “International Folk Art Market.” Milton Riess, head of the Santa Fe Community College Film Department said, “An Emmy is the greatest honor awarded in television. Kaela Waldstein deserves this recognition. She’s a stand-out student. I’m glad to see a woman get this recognition, since women do not always get acknowledgment in the male-dominated profession. It’s all about the quality of the work and that’s what it should be, not the gender.”

A self-taught filmmaker with her own production company, Mountain Mover Media, Waldstein came to SFCC to fill in the gaps of her knowledge and connect with the local film community. She said, “I love the film program. I’m being pushed further outside my comfort zone, and am experimenting with equipment and techniques I had not before considered.”

The 35-year-old filmmaker moved to Santa Fe from San Francisco about a year and a half ago. Studying at the college has connected her to more people with similar goals and aspirations. “The faculty is of a high caliber and having access to all the equipment in the Film Cage is a super valuable resource all on its own,” she said.

Another of her short films, “Zozobra: The Original Burning Man,” also received a nomination in the same category. To see her award-winning film and other work samples visit mountainmovermedia.com.

Read Alex Devore’s 3 Questions interview from the Oct. 11 edition of the Santa Fe Reporter where she talks about her inspiration and aspirations.