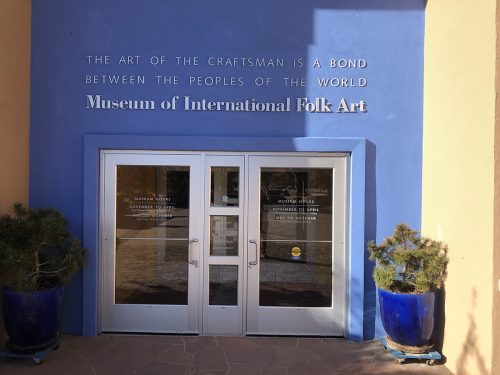 The entryway to the Museum of International Folk Art. The museum presented the symposium in conjunction with the current exhibition.

Speakers presented a variety of programs about the distinguished designer.

Both SFCC students Jesus Gallegos and Media Arts Tech David Jones were awarded scholarships to attend the Museum of International Folk Arts Girard: Culture x Design symposium on the art and legacy of Alexander Girard, considered one of the most important designers of the 20th century. It was through instructor Arlyn Nathan’s efforts that SFCC representatives were chosen for this honor. (Due to illness, Jesus Gallegos was unable to attend, but was honored to receive the scholarship.)

Girard: Culture x Design was a 2-day symposium about Alexander Girard, a luminary of modern design
whose close engagement with traditional arts, whimsical toys, and everyday objects from around the
world was a rich visual resource. Symposium speakers and moderated discussions examined Girard
through various lenses in order to create a more complex and textured understanding of his place in the
history of American design as well as his approach to the collecting and exhibiting of global material
culture. The symposium took place October 18-19, 2019, at the Museum of International Folk Art,
Santa Fe, New Mexico.

The Museum of International Folk Art (MOIFA) is home to one of few remaining examples of Girard’s
designed environments, the exhibition Multiple Visions: A Common Bond, which Girard created and
installed in 1982 from his 106,000-object folk art collection. Here, modern design and folk art converge.
By inviting contributors to explore Girard through multiple disciplines—design, art history, folklore,
anthropology, and museology—this symposium offers previously unexplored perspectives on Girard and
insists on a more complex interpretation of his role in both worlds. Girard: Culture x Design will also
situate folk art as more than a mere footnote to Girard’s design career.
Girard: Culture x Design is in conjunction with the exhibition Alexander Girard: A Designer’s Universe,
organized by Vitra Design Museum, on view at MOIFA through October 27, 2019.